Not surprisingly, the scope of the scientific presentations invited for this conference reflected the complexity of issues described above. Whilst a number were on the distribution, sources and effects of contaminants in sediments (quality), a large number focused upon studies and tools to better understand the sources, transport, dynamics and effects of sediments (quantity) from land to estuaries and the sea. Sediment management talks addressed management strategies, decision frameworks, and conceptual and communication tools for better linking sediment science, policy and management. A unifying theme through many of the sessions was how sediment mediates intimate links between human activities and ecosystem functioning, using the concept of ecosystem services* as the connection.

Whilst there was a general agreement about the important role of sediment in mediating ecosystem services, the emphasis on sediment as a problem or a resource (or both) differed depending upon the focus of various studies. It was recommended that the role of sediments in RBMPs could only be effectively addressed with a focus on the links between economic activities, ecosystem function and ecosystem services. Although implicitly required in European policy, a conclusion was that ecosystem-based, rather than standards-based management was currently not being carried out. A role of SedNet and its associated scientists, stakeholders and managers should be to identify essential ecosystem services, and then to manage human activities and sediments to protect and enhance the habitats that are essential to provide those services. Whilst some felt that the serious impacts caused by excess sediments should result in the consideration of suspended matter as a pollutant to be eliminated, others were more concerned with the impacts of sediment loss, and it was generally felt that science and policy should focus on a balance. Win-win situations are possible, and it is necessary to develop ways to meet economic and ecological objectives.

There was concern that whilst many of the processes controlling sediment dynamics responded on very long timescales to short timescale actions and decisions, there was a general feeling that we could learn from historical records and trends, but that decisions could not always wait for certainty, and that caution and adaptive management were necessary.

Hydrologic and sediment systems are not static, even under natural conditions. However, human intervention can change the rates and extents of those changes. Humans have and will continue to change these systems, but there is a growing need to understand and control the effects of these changes. Sediments are a critical link between many systems and activities, and thus their role must be understood and managed. It is clear, however, that the role of sediments is so diverse and far-reaching that a European Sediment Directive would not be the right approach, as there is no on-size-fits all solution to the issues. Rather, it is important to understand the role of sediments in various ecological and socioeconomic processes. SedNet seeks to provide a forum for sediment-related discussions linking the scientific, political and technical aspects of sediment and it impacts from land to the sea.

Text also published in the SETAC Globe. Reprinted with permission from the SETAC Globe, member newsletter of the Society of Environmental Toxicology and Chemistry (SETAC), which cannot be responsible for the validity of all information presented here or for the consequences of its use. Information contained herein has not been reviewed or substantially edited and does not necessarily reflect the policy or views of SETAC. Mention of commercial or noncommercial products, services, or organizations does not imply endorsement or affiliation by SETAC.

“Sediment key-issues between the river and the sea”
An impression by Phil Owens, Cranfield University, UK

Sediment, along with water, provides a link between the fluvial, estuarine and marine environments. Thus it connects river catchments to the coastal zone. To date, however, it can be argued that work on sediment dynamics and management in freshwater river catchments has tended to be isolated from work on estuarine and marine areas, except at critical interfaces or where one provides input to the other. With the introduction of the Water Framework Directive and Marine Strategy, and associated research and policy requirements for these, there is a need to assess the role of sediment at the river-sea interface. In order to encourage this interaction, SedNet organized a conference on the 23-24th November 2006 entitled:Sediment key-issues between the river and the sea, which was hosted by UNESCO at Palazzo Zorzi in Venice, Italy. 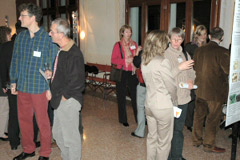 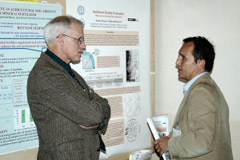 The conference was attended by about 100 delegates from 15 countries. There were 16 oral and 23 poster presentations. On the afternoon and evening of the 23rd November, there was a reception at Palazzo Zorzi during which the posters were displayed and the SedNet book series was launched by Jürgen Büsing of the European Commission – DG Research. SedNet books 1 (Barceló and Petrovic, 2007) and 2 (Bortone and Palumbo, 2007) were officially handed to the EC in recognition of their financial support for the 3-year first phase of SedNet (2002-2004). Books 3 (Heise, 2007) and 4 (Owens, 2007) of the SedNet series are officially due out in early-mid 2007.

Day-2 of the conference started with welcoming presentations by Axel Netzband (Hamburg Port Authority, Germany, and Chairperson of SedNet) and Philippe Pypaert (UNESCO, Italy). This was followed by a summary by Piet den Besten (Ministry of Transport, Public Works and Watermanagement/RIZA, the Netherlands, and SedNet Steering Group) of a round-table workshop organized by SedNet at the same venue on 22-23 November. Piet presented the outcome of the discussions by regulators, scientific experts and stakeholders on sediment issues and management in four river basins: Danube, Douro, Elbe and Humber. One thing that became clear during the workshop was the fact that sediment was an important, and perhaps largely neglected, part of all four river basins, and that River Basin Management Plans as part of the WFD need to pay more attention to the role and functioning of sediments within water ecosystems. 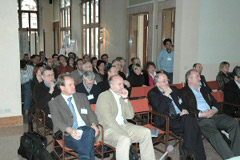 The second session was on Sediment Transport and Dynamics and opened with a key-note presentation by Victor de Jonge (Groningen University, The Netherlands) on Functions of mud in estuarine and coastal ecosystems. Victor’s presentation described the lessons that can be learnt from basic ecological theories for a wider understanding of sediment dynamics for improved sediment management in estuarine and coastal environments. Other presentations in this session were by Paula Freire (National Civil Engineering Laboratory, Portugal), Larissa Naylor (Environment Agency, UK), Albert Rovira (IRTA, Spain), Rodney Stevens (Göteborg University, Sweden) and Jim Bogen (Norwegia Water Resources and Energy Directorate, Norway).

The last session focused more specifically on Sediment Management and included a pleasing mix of approaches. Lindsay Murray (CEFAS, UK) opened the session with a key note on The benefits of the use of dredged material in the aquatic system using case study examples to illustrate how the physical management of sediment in estuarine and coastal areas can result in societal and ecological benefits. Alternative sediment management approaches and strategies were provided by Maria Jesus Belzunce (AZTI-Tecnalia, Spain), Sabine Apitz (SEA Environmental Decisions, UK) and Adriaan Slob (TNO, The Netherlands), which further highlighted the important role of sediment within environmental-, ecosystem- and policy-based decision-making.

As a general conclusion, Axel Netzband explained that while sediments are clearly important in all riverine, estuarine and marine systems, that there is not one simple management solution that fits all situations. SedNet can, however, play an important role through facilitating discussion between various interested parties and experts and via discussions with policy-makers including the EU.

The SedNet Steering Group would like to thank all of the attendees, the oral and poster presenters, session chairs, UNESCO for hosting the conference, and Consorzio Venezia Nuovo for helping organize the poster session. It is planned that selected presentations from the conference will be published in Journal of Soils and Sediments in late 2007. For further details contact Phil Owens: owensp@unbc.ca

Abstracts and slides of the oral and poster presentations can be found on in the library.