On 27-28 June 2016 SedNet held a steer group (SG) meeting in Oslo.
Main issues on the SG meeting agenda were the preparation of two upcoming SedNet key-events. The first event is the 3rd SedNet Round Table Discussion (RTD) “Elbe meets Danube” (8-9 November 2016, Budapest). The objective is to exchange experiences between both river basins, and other river basins are welcome to join, on integration of sediment management in WFD River Basin Management Plans (RBMP). Inspired by the work done by SedNet, the SedNet SG member Peter Heininger (BfG) led the process that concluded in the 1st example of full-bodied inclusion of sediment management in a RBMP, i.e. the one for the Elbe. SedNet, in close cooperation with the river basin commissions of the Elbe and the Danube, now organize this RTD.
The 2nd event is the 10th International SedNet conference “Sediments on the Move”. This conference will be held in Genoa, 14-17 June 2017 – see article further in this newsletter.

The SedNet SG was invited by the SG meeting host NGI (also a SedNet SG member) for a nice dinner in the new Olso Opera House. This is a special place for SedNet as the 5th SedNet conference was held in Olso in 2008, having as conference title “Urban sediment management and port redevelopment”. Especially the management of contaminated dredged material from the harbor in front of this Opera house was in 2008 the reason to have this conference theme. Although environmentally it was regarded the most sustainable solution to dispose this material a bit further in a very deep spot of the Oslo Fjord, action groups caused a lot of concern, delay and thus also costs increase of the dredging operations. Even today public concern and opposition hamper management of dredged material in Norway. 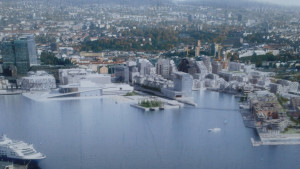 Authorities investigated the case in eighteen months, and then had to withdraw charges for violation of pollution law. 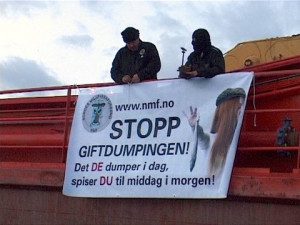 SedNet continues to provide a much appreciated platform to all stakeholders, including scientists, to discuss and find generic ways forward to cope with such and other complicated European sediment management issues. Especially where these issues relate to European policies such as the WFD, MSFD, Natura 2000, Biodiversity Strategy and Waste Directive.

SedNet is glad to may welcome two new members of the Steering Group:

The 10th International SedNet conference “Sediments on the Move” will be held in Genoa, 14-17 June 2017.  The event is co-organised/hosted by the University of Genoa/DISTAV and the Port of Genoa Authority.

The Call for Abstract will be published by the end of September. 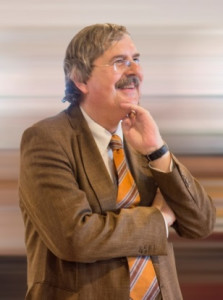 It is with great sadness to announce that we have lost Prof. dr. R.W.P.M (Remi) Laane on May 31st this year.
Remi was one of the founding fathers of SedNet.
The idea to start SedNet emerged from a sediment workshop organized in April 2000 at the GKSS Research Centre, in Geesthacht, Germany1. Remi was one of the workshop participants and immediately, when the idea was raised, it met Remi’s full interest. Very much due to Remi’s enthusiasm, convincing power and support, the idea could mature into a successful proposal to the European Commission for a 3-year project (2002-2004) with the aim to set up a European Sediment Network, i.e. SedNet.
In those days Remi was working as a marine expert at the Dutch, National Institute for Coastal and Marine Management (RIKZ). This institute merged in 2008 with others into the new, independent applied research institute Deltares. Here he continued working till his retirement, amongst others as an affiliate professor at the University of Amsterdam, holding a special chair in Marine Biogeochemistry.
When the SedNet project kicked-off, he put Joop Bakker – one of his younger RIKZ colleagues – at the front to participate in the project. But Joop was always fully backed-up by Remi’s on-going support and wisdom. This typically demonstrates how we will remember Remi: always recognizing and supporting good ideas, but not having to be in the lead to receive the credits. Rather giving his younger colleagues the opportunity to ‘shine’. That is what we will sadly miss.
1 GKSS workshop reference: https://sednet.org/download/Science_workshop_April_2000_(POR_II).pdf

From 18 to 20th June 2016 the Hong Kong University and the Swire Institute of Marine Science organized the 2nd International Conference on Deriving Environmental Quality Standards for the Protection of Aquatic Ecosystems (EQSPAE – 2016). The conference brought together scientists and environmental practitioners from government, academia and private sector to discuss on the latest developments in the science and methodology for deriving generic and site-specific environmental quality benchmarks as well as advancements in their related policy and application for water quality management in different parts of the world. The program included a one day workshop on derivation and application of sediment quality guidelines and a two days conference with talks and poster presentations dedicated to both the water and sediment compartment. More information is available at the conference website: http://www.biosch.hku.hk/eqspae/

Deltares is working on the quantification of the large-scale coastal sediment budget of four countries in West Africa: Ivory Coast, Ghana, Togo and Benin. The main objective of the study is to quantify natural sediment transport patterns and the potential effects of major human interventions and climate change on the sediment budget and consequent shoreline changes. 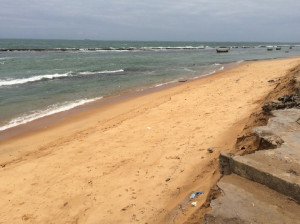 The coast of West Africa consists of a narrow low-lying coastal strip maintained by sediment from rivers that is transported along the coast by waves and currents like a “sand river”. The coastal areas are home to 31% of the region’s population — which is growing at a rate of four percent annually. The coast also accounts for 56% of the region’s GDP. Today, however, much of the fluvial sand flow is blocked by river dams and/or interrupted at several locations by harbour jetties. The sandy coastal barrier is therefore eroding almost everywhere; the situation is already critical and it is likely to degenerate in the future due to climate change.
According to the Deltares project leader Alessio Giardino, the study is unique for a number of reasons. “First of all, the quantification of the large sediment budget, with one consistent set of numerical models, will make it possible to overcome the fragmentation of information between different countries. This large-scale study will also allow for the assessment of the implications of action in one country for neighbouring countries. Finally, sharing information and creating awareness are key to the success of a project of this kind and so the main output from the project will be shared in a number of consultation and validation workshops. The output will also be made publicly available in an on-line viewer and brochure backed up by a more technical report.”
The project is part of the World Bank’s West Africa Coastal Areas Program (WACA), a convening platform that aims to help countries obtain financing and expertise to sustainably manage their coastal areas. The program was established in 2015 in response to requests from West African countries to manage coastal erosion and flooding, promote climate-resilient coastal management and improve livelihoods of West Africa’s coastal communities. 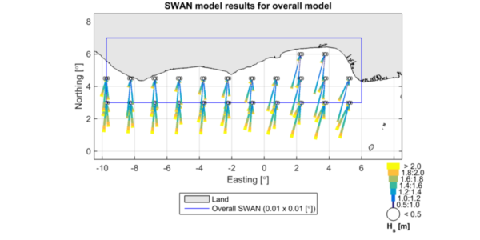 Partrac have been assisting academic staff and researchers from Mississippi State University to implement a beach sediment tracking study on Deer Island, Mississippi , the closest barrier island to the Mississippi Gulf Coast.
The study was commissioned and funded by the Mississippi Department of Marine Resources’ (DMR) Mississippi Tidelands Trust Fund Program. It is being undertaken to examine and better understand pathways of alongshore sediment transport, the rate of movement, and predominant direction on the foreshore of the sensitive Deer Island Mississippi Coastal Preserve, which is an official DMR Gulf Ecological Management Site (GEMS).
Dr Anna Linhoss of MSU’s hydroecology laboratory leading the study commented, “The study is being conducted as part of a wider effort to improve our understanding of sand erosion and deposition in the MS Gulf Coast. We are undertaking this initial sand tracking study for the purposes of model calibration and validation, and to feed into the wider objective of restoring the integrity of the sand transport system along the region’s coastline.”
Partrac’s role in the project was to assist with study design, deployment of their proprietary dual signature tracer material at the site, and subsequent sampling and analyses efforts.

Further information on this study can be obtained by contacting newcastle@partrac.com

The field test is part of the overall project ‘Sustainable Port Management’ for the port of Delfzijl.
One of the primary goals of the project Sustainable Port Management is to investigate whether it is possible to optimize the tidal window of the port without a significant increase of the maintenance dredging volumes. One of the realistic approaches to increase the tidal window of the port is to implement the Keep Sediments Navigable method. This method has already been successfully applied in the port of Emden.

In many of the world’s largest harbors, appropriate hydrographic survey is a necessary requirement in order to keep dredging costs low. The port of Emden succeeded in reducing the dredging costs by 90% with the help of a new dredging management and hydrographic survey with the density probe admodus®USP pro.
In 1994, after many years of research, the port authority managed to maintain the fluidity of suspended sediments, which were carried into the harbor basin by the river Ems. This so called “sediment conditioning” is mainly based on the prevention of the fluid mud’s reconsolidation process by a regular treatment (recirculation). As a result, these sediments no longer have to be removed from the harbor basin and a lot of disposal costs can be saved.
Until 1994, harbor maintenance dredging at the seaport of Emden was mainly based on the costintensive removal of suspended silt. This removal was done by a cutter suction dredger.To prevent expensive shifts of this cutter suction dredger, a trailing suction hopper dredger (TSHD) was used to dump its dredged material right in front of the cutting head of the cutter suction dredger to provide a constant silt supply.

19-23 September 2016: Ecosystem Services Conference 2016 EU – Helping nature to help us, Antwerp, Belgium. This conference will be the biggest European event in 2016 that links science, policy and practice on ecosystem services and natural capital, with a strong focus on practice and implementation. The conference will include nearly 70 sessions. www.esconference2016.eu

27-28 September 2016: the 9th Rostock dredged material seminar will be held prospectively on 27 to 28 September 2016, Rostock, Germany. Documents about the previous seminar can be found at
www2.auf.uni-rostock.de/ll/baggergut/bg_orga.html

3-5 October 2016: 5th PiE Conference, Budapest, Hungary. Particle in Europe, or PiE, is a bi-annual conference on the measurement, monitoring, and managing of in situ particle size and sediment concentration in the aquatic environment. The meeting is sponsored by Sequoia and the University of Technology and Economics in Budapest, Hungary. More info on PiE-2016 Conference

19-22 October 2016: 14th International Conference “EUROPE-INBO 2016” for the implementation of the European Water Directives, Lourdes, France. Organised by the International Network of Basin.  www.inbo-news.org

6-7 October 2016: International Magdeburger Seminar on River Protection, to be held in in the city of Dresden, Germany. Main topics will be urban waters and its management. www.ikse-mkol.org

21-26 May 2017: 14th International Symposium on the Interactions between Sediments and Water, Taormina, Italy, organized by the International Association for Sediment Water Science (IASWS).  Full details are available on the conference website. Selected papers presented at the conference will be published in a Special Issue of the Journal of Soils and Sediments.

14-17 June 2017: 10th International SedNet Conference, co-organised and hosted by University of Genoa/DISTAV and the Port of Genoa Authority. Call for Abstracts will open in September.  www.sednet.org

26-30 June 2017: AquaConSoil 2017, Lyon, France. 14th International Conference on Sustainable Use and Management of Soil, Sediment and Water Resources. Call for abstracts is open now. Deadline for submission is 15 November 2016. www.aquaconsoil.org